The Calamus Lutheran Parish consists of two congregations, Our Savior's Lutheran Church and Faith Lutheran Church. While they are two individual congregations with individual histories, Our Savior's and Faith have some history in common. This began in 1853 when the eighth Norwegian settlement in Iowa was started in Olive Township of Clinton County. Those wishing to form a worshipping community selected a site southeast of Calamus to build their church. The first congregational records were dated December 27, 1861. However, congregational activities had begun before that date. In 1865 a school was built. The name Kvindherred was the region in Norway from which the settlers had come. By 1877, the Kvindherred Lutheran Church was erected. In 1946, the name was changed to Our Savior's.

In 1947, discussion was started as to building a new church or remodeling the existing church. Decisions were difficult to make. One group remained in the country and remodeled the existing church. Another group, together with the pastor, left to form a congregation in the town of Calamus.

As we look forward to the future, we pray that the Calamus Lutheran Parish will continue to be nourished and to grow, so that we might spread the Good News of God in Christ to all of our neighbors. Thanks be to God for all the many gifts of love and grace. 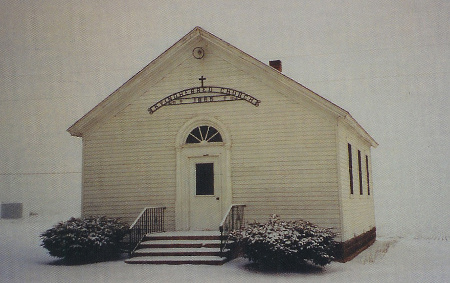